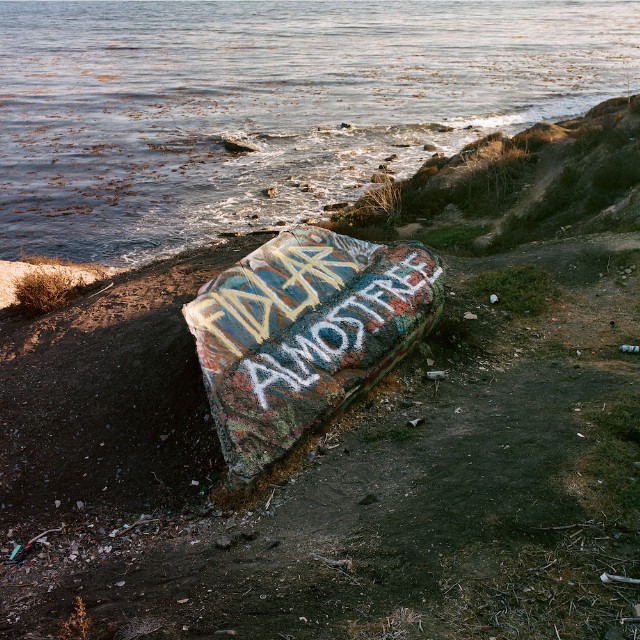 People tend to think that critics enjoy writing hit pieces and takedowns. As someone who has written a few, I disagree. I take no pleasure in something being bad. And sure, the moment you’re socially permitted to let loose and just declare something a pile of shit is cathartic. It doesn’t give me, or any of the people who listened to, read, or watched something terrible their time back. After listening to the latest FIDLAR album, I want my fucking time back.

Every so often a record creeps along that demands a track by track breakdown. I hate doing this  because it’s dull and predictable, but Almost Free demands it. My apologies in advance. “Get Off My Rock” is a twenty years too late call back to Beastie Boys that possesses neither the charm nor lyrical precision necessary to make it work. From the jump, this album is starting on the wrong foot, and it doesn’t get much better from there. “Can’t You See” has little of the punk chops that made FIDLAR’s first record so special. The track itself mocks the idea of the typical west coast millennial who does yoga and always needs to be on the hottest track. I hate saying that an artist’s song doesn’t sound like them because it presupposes personal ownership of the artists identity, but this song certainly doesn’t sound anything like what made FIDLAR so special in the first place.

Standing out near the front of the record is “By Myself,” a cheeky anthem centered around drinking way too much, and it is at least kind of funny. But the sound is overly processed for such a scummy track, making for another conflict of identity within the band. When FIDLAR released their self titled album, they established themselves as the rattier, less radio friendly successor to groups like Wavves, but this record and Too sees them aiming to become the new punk radio sensation. We’re left with a half baked sound and a whole lot of disappointment. FIDLAR does pull off a half decent impression of AM era Arctic Monkey’s on “Flake,” which ends up being one of the better songs on the record because of it. While the sound is pretty derivative, the execution is decent enough that it’s easy to look past.

If you’re looking for an example of what the record should’ve been, look no further than “Alcohol.” It’s an in your face, spit flecked anthem to the virtues of getting wildly fucked up for no reason in particular. Grinding guitars lend themselves to the stomping rhythm of the song and the squeaky guitar solo in the center of the track ties the whole thing together perfectly. If they had made “Alcohol” as an album, this would be a worthy successor to their self-titled record. Unfortunately, it’s little more than a diamond in the rough. “Nuke” and “Too Real” join “Alcohol” as part of the “what it should have been” tracklist. “Nuke” in particular is excellent but way too short, and “Too Real” throws back to a softer, more mature imagining of some of their earlier material. Had the album ended up sounding like “Too Real” it may have been a predictable and excellent evolution of sound from their self-titled record.

The icing on the shit cake of this record is absolutely “Called You Twice,” that song is… something else. Basically, FIDLAR attempts a love song about something other than drugs and alcohol and I would recommend not listening. It falls into all the trappings of bad love songs, leaning especially hard on the idea of falling in love with someone who is clearly a bad fit. On top of that the feature of K. Flay on the track and the “duet” during the chorus is poorly conceived and comically bad.

As much as it falls out of the mold of what makes a good FIDLAR song, I don’t hate “Kick.” After awhile the groove focused elements of the track all mesh together into something that actually works. “Thought. Mouth.” has an awful section at 0:35 that feels more applicable to something off of a Barenaked Ladies album before breaking into a pop-punk back section. It also wins points for the opening line “I’m gonna move to Canada, cuz fuck America,” because… well yeah. “Good Times Are Over” finishes the record on a much higher note than it starts, but if you’ve still got the attention span at this point in the record you’re probably just a huge FIDLAR fan. After this album and Too, props to you, because I’ve officially turned in my ticket and swan dove off this suicide train.
I hate watching potential wash down the drain, yet, I find myself doing it every single day, I didn’t need FIDLAR to increase my agony. Almost Free ends up being a solid dissertation on why FIDLAR is the biggest punk rock disappointment of the 2010’s. The mighty certainly have tumbled, and the resulting earthquake sounds like little more than a waste of time.