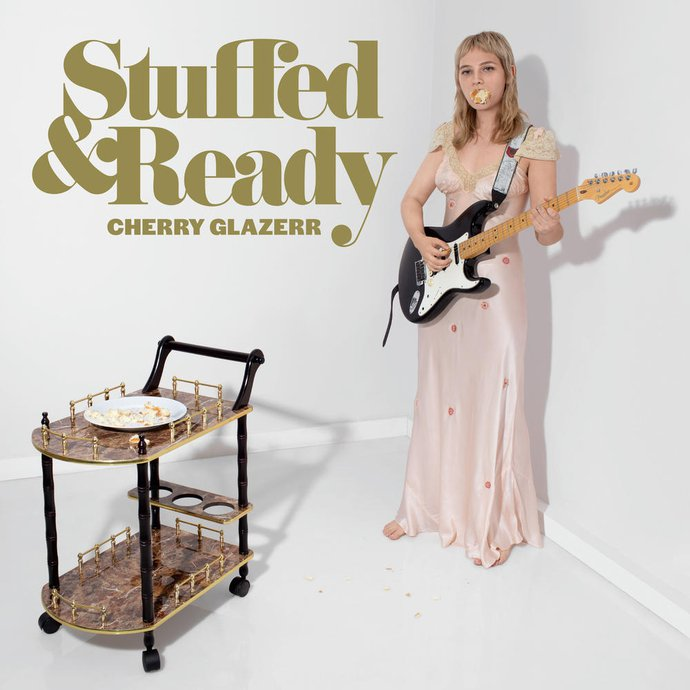 It’s often said that a musician spends their whole life creating their first work, and only the time in between each release creating the others. If this is true, it’s no wonder that so many artists tumble from the great heights and expectations set by their debut. Luckily, that’s not the trajectory of every group. For every Nas there’s a Jay-Z chock full of longevity and sustained creative brilliance that only burns brighter as their career goes on. Cherry Glazerr has finally hit that point, and on Stuffed & Ready they explode in a brilliant burst of light.

I have to admit, when it comes to Cherry Glazerr I’m a little on the biased side. I had the good fortune of catching the young upstarts while they opened for Wavves and Best Coast at the House of Blues in Anaheim, just outside of Disneyland. While they delivered the least notable set of the night, the lead singer, Clementine Creevy, possessed a sort of magnetic energy that forced me to dig deeper into the band. Later that evening, I hit the merch table and bought a white Best Coast t-shirt with the band name stylized to look like the Seinfeld logo and a vinyl copy of Cherry Glazerr’s Haxel Princess. While the album was okay enough, I have to say it didn’t leave too much of an impression, it quickly found itself as another attention catcher in my record collection, but I couldn’t shake the feeling that I saw a rocket just before it was ready to launch.

Smash cut to 2017 and Cherry Glazerr has just released their then latest album Apocalipstick, a fun, tight, politically charged record that earned more than a few raised eyebrows. After hearing it I became convinced that this was the new direction for the band. They would forever be a well composed group of songwriters with more than enough lyrical heft to carry them through some of the less inspired tracks, while still possessing enough self-awareness to keep things mostly light and fun.

Stuffed & Ready flips all of that on its head. I was bewildered by the opening verses, which come in soft and quiet before exploding into blue white flames, something that Cherry Glazerr had yet to try. The production on this album is effortless and impactful at the same time, each note is an electric shock sent straight into an ear drum. The resulting sound is more than reminiscent of White Lungs excellent Deep Fantasy, though perhaps a little less rough around the edges. This is no doubt the influence of a trimmed down and retooled lineup that, when coupled with modern events, had no choice but to write an album that crackles and blisters at each opportunity.

What is most different between Stuffed & Ready and previous efforts from the band is that none of this feels quite so tongue in cheek. While that penchant for playfulness occasionally peeks out, as it does on the song “Daddi” with lyrics like “Who should I fuck daddi, is it you?” there is a seething rage behind each of the words, forcing the comical elements to become all too real, allowing them to bypass listeners built up defenses. The lyrics may be sharper than ever, but the sound design is the true star of this record. Songs like “Wasted Nun” and “Isolation” absolutely rip, the guitar is slick and ferocious, often sounding like a livewire coated in ice. Creevy also finds a new angle for her voice on this record and we get to see her at her most dynamic as she performs tightwire vocal gymnastics over these cutting guitars and clattering drums. The result is an emotionally poignant album that feels riddled with anxiety over current times and the simple act of existing. There’s a lot to relate to and it certainly helps that Creevy makes anxiety and rage sound so intoxicating.

Watching bands get better is something special. At twenty-five, this is the closest I’ve come to feeling a sense of parental accomplishment, and while I’ve clearly had nothing to do with the well earned success of Cherry Glazerr I find myself proud nonetheless. Stuffed & Ready is a triumph no matter how you slice it. Even if you were expecting cheekier tongue in cheek punk, the mere fact that they could evolve so much in two years shows incredible skill as a band and proves that as they move forward they’re one to keep an eye on. For now though, give Stuffed & Ready another couple listens, it’s one of the absolute best this year has to offer.